As promised in the author spotlight I did a couple Fridays back, I’m resurrecting the book review portion of this blog — a section that I’ve been woefully lax in maintaining. And since Friday is generally kept for writing/editing advice or whatever other shenanigans I decide to write about, the book reviews will keep their designated day of Wednesday. Why does this matter? I suppose it doesn’t; I just wanted to give you a quick reminder of how I divide the content so you can know which day to tune in. With that done and out of the way, on to the book review!

I See the Web 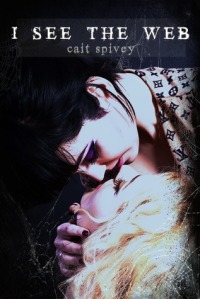 Seventeen-year-old Erin has a lot to look forward to, even if it suddenly seems like everywhere she turns there’s a spider staring at her. She’s finally out to her friends and family, surprising exactly no one. When Dawn, the love of her tender teenage dreams, corners her in the library, a whole new world opens up to Erin. From here on out, it’s all make-out sessions with her beautiful girlfriend in rooms stacked high with books.
Until the spiders start whispering.

Turns out the spiders aren’t just stalking her for kicks. They need her to be their voice, their vessel, whatever that means. But their timing is crap, because there’s no way Erin is giving up her human life just when things are starting to get amazing. Too bad the spiders just won’t quit. Like it or not, Erin will have to choose, and it won’t be nearly as easy as she thinks.

Anyone who knows me will tell you that I loathe spiders. Not quite to the scream-bloody-murder-every-time-I-see-one level, but I definitely qualify for arachnophobia. So when I first heard about this novella, I had distinct misgivings over the very obvious inclusion of my eight-legged enemies.

Still, having read some of Spivey’s other work, I really wanted to give it a try, especially since it’s the first in a series I’ve rapidly come to expect great things from. So I braced myself for the worst and dove in, opening the file to see this as the first line:

“No one likes spiders.”

The MC, Erin, goes on to express all the things I’ve often thought about the multi-legged abominations, instantly putting me at ease and creating a bond that held throughout the story. This is the thing I love most about Spivey’s writing — her ability to craft rich, realistic characters that are entirely believable.

Erin’s voice is modern, but perfectly crafted to emulate that of a seventeen-year-old, and her internal struggle as she wrestles with understanding her sexuality and identity resonate without overpowering the plot. We watch as Erin discovers the innocence of first love, all while Spivey weaves a web of foreshadowing around it.

This novella serves as an origin story for what is clearly a much more complicated mythology/universe, and I was left with a lot of unanswered questions. What exactly is The Web? Why can the people on this street sense danger and how does that work? Why doesn’t anyone notice the drama on Dawn’s front lawn, or the aftermath that follows? I can’t list them all without giving away some significant spoilers (which is also why I haven’t said much about the plot itself), but suffice it to say that this is not a story you want to read if you’re looking for a self-contained tale with a satisfying, close-ended resolution. Instead, it’s an introduction to what is definitely a unique and intriguing new concept. The glimpses we were given into the mythos behind the spiders is enough to convince me that I’ve never seen anything quite like this. It’s refreshing and original, and I’m definitely looking forward to the return of Erin and Dawn later in the series.

And for all my fellow arachnophobes out there, the spiders really aren’t that bad. Spivey does a fantastic job of creating an atmosphere that is both terrifying and creepy without triggering that horrifying sensation of spiders crawling on your skin.

I highly recommend this to people looking for a short afternoon read or those looking to be introduced to a promising new author.