This week, I’m introducing a new feature to Nightwolf’s Corner (seems like I’m doing that a lot lately). As an editor, (both freelance and under REUTS Publications), I have the wonderful opportunity to see amazing novels during their developmental phase. And I wanted to find a way to share them with all of you as they became available. (I also wanted to find a way to help support the authors that trusted me with their manuscripts.) So think of these posts as my own personal book recommendations, straight from the editor’s desk.

A Foundation in Wisdom 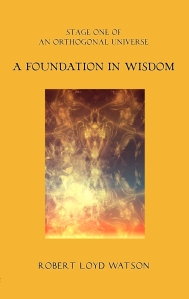 History repeats itself. This is what I taught, and always believed. Then I met Sheridan, a man hitchhiking down the highway without a care in the world – a lonely figure who told me history, and the world, was ending. His evidence was the story of a mathematician who tried to prove the world didn’t exist.

It was a silly proposition. Nobody can prove the world doesn’t exist. But as I became more convinced Sheridan was right, that the proof lay at the edge of reality, I could only wonder, where would we go?

A Foundation in Wisdom is not your average tale. An intellectual adventure, steeped in mystery and suspense with a quirky sense of humor, it calls up shades of Douglas Adams’ The Hitchhiker’s Guide to the Galaxy and cross-breeds it with Lewis Carroll’s Alice in Wonderland. Intriguing blend, isn’t it?

The book starts by introducing us to John Bartlebee, a traveling scholar that teaches History seminars across the country. On the way to his next appointment, he stops to help a guy stranded on the side of the road, offering him a ride. But from the moment he meets Sheridan, he knows something’s not quite right about him, and very soon realizes that he may have made a grave mistake by picking him up. Sheridan insists the world is ending, and proceeds to offer John proof in the form of a story.

Sheridan’s protagonist, Marcus, is a young mathematician trying to find his place in the world. When he accidentally stumbles on the ability to prove away existence, he’s set on a quest to discover what existence really means. What follows is a fascinating cast of quirky characters and an adventure of intricate twists and turns. All while the mystery of Sheridan continues to build and John starts to wonder if maybe he isn’t quite so crazy after all.

Robert Watson has created a unique blend of mathematics philosophy and fiction; a refreshingly different combination that I’d never seen before. He expertly builds tension around Sheridan and John’s half of the story while keeping us entertained with Marcus’s. But underneath the sarcastic, slightly strange plot, Watson poses some deep philosophical questions.

“What does it mean to exist?”

“What if you could prove the world away? Would you?”

To learn more about A Foundation in Wisdom and the rest of An Orthogonal Universe, please visit the series website. And if you’d simply like to purchase it, (which you should! It truly is fantastic!) you can find it in both digital and print versions at Amazon.

Thank you to Robert for allowing me to be a part of your journey. I wish you all the success you deserve. 🙂