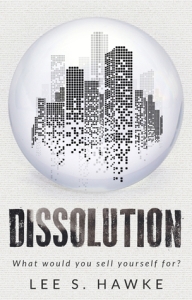 What would you sell yourself for?

Madeline knows. She’s spent the last eighteen years impatiently waiting for her Auctioning so she can sell herself to MERCE Solutions Limited for a hundred thousand credits. But when the Auctioneer fails to call her and two suits show up at her doorstep, Madeline discovers there are far worse bargains to be made.

So when your loved ones are in danger, there’s a bounty on your head, and your entire city might turn out to be a lie . . . what would you sell yourself for?

Now, I know what you’re thinking — yay, another dystopian to add to all the other dystopians flooding the market. But trust me, this one is unlike anything you’ve read. Yes, it does have some shades of The Hunger Games, Divergent, and even a bit of The Giver embedded in it, but the premise underneath those elements is refreshing, different, and thought-provoking. Everything a good science fiction tale should be.

Hawke’s world is dominated by corporations, and a person’s value is entirely dependent on how much they can give — what their productivity is likely to be, how their skills rank against the corporations’ needs. They’re not people, they’re drones, slaves. Licensed IP to be bought and traded and sold. It’s chilling, and a cautionary message to the workaholics of the world.

But while there is a very strong thread of social commentary running throughout, it takes a back seat to the larger tale, which is an action-packed cyberpunk thriller in the vein of Phillip K. Dick.

Madeline (Maddie) has spent her entire life dreaming of escape from ANRON Life Limited, pegging all her hopes on the possibility of being purchased by MERCE, the more technology oriented corporation where she can put her modding skills to good use and where she’ll no longer be a human lab rat. But after years of rigorous trials and tests, competition, and an interview process that feels more like an interrogation than an interview, she finds that there was never any chance for escape. Her life has always belonged to ANRON, and now, they want it back. They’re revoking her license, sentencing her to death in the name of science.

And she’s having none of it. Alone, disconnected from the technology that serves as a lifeline for most of the city’s denizens, and on the run, she learns the true difference between good and evil. And in the process, she discovers that the corporations aren’t as untouchable as they seem.

Brilliant, emotional, and intelligent, Dissolution is a highly satisfying read. It is a novella, but don’t let that scare you off. It’s a complete, self-contained, and moving tale that will challenge you to rethink your own views on corporations and technology in general. It’s a smart, well-written, amazing piece of storytelling and should not be missed.