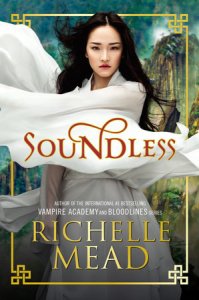 For as long as Fei can remember, there has been no sound in her village, where rocky terrain and frequent avalanches prevent residents from self-sustaining. Fei and her people are at the mercy of a zipline that carries food up the treacherous cliffs from Beiguo, a mysterious faraway kingdom.

When villagers begin to lose their sight, deliveries from the zipline shrink and many go hungry. Fei’s home, the people she loves, and her entire existence is plunged into crisis, under threat of darkness and starvation.

But soon Fei is awoken in the night by a searing noise, and sound becomes her weapon.

Richelle Mead takes readers on a triumphant journey from the peak of Fei’s jagged mountain village to the valley of Beiguo, where a startling truth and an unlikely romance will change her life forever….

I vaguely remember hearing about this one prior to its release, so when I stumbled on it in my local library, I eagerly picked it up. Having been a long-time fan of Chinese folklore, it sounded like a sure-fire win. And for the most part, it was.

Right from the first page, I was hooked by the world-building. Lush and beautiful, Mead paints the alternate world of Beiguo with vivid color and a style that reminded me a bit of my favorite video game — Jade Empire — crossed with a Disney film. It’s gorgeously life-like, but with definite fairy tale magic woven throughout. I’ve seen several reviewers class this as a “retelling,” but if it is, I’m not familiar with the original tale. Mead definitely captures the overall feel of a folktale, but I’m also not sure how authentically Chinese it is. I will say that her culture, which I suspect was largely fictional and merely inspired by Chinese history/mythology, did feel authentic to her world. How closely that reflects our own though, I’m not qualified to say.

The set-up of the story is original and intriguing — a village trapped at the top of a mountain, a people who have lost the ability to hear, and a mystery illness threatening it all — and Mead does a fantastic job of creating a culture where deafness is the norm. Some of the most brilliant moments came in the descriptions of what it’s like for Fei when her hearing suddenly returns. The way Mead portrays that experience was eye-opening for someone like me, who has never had to contend with a life without sound, and it resonated deeply. I appreciated that while she did sort of fall into the trap of the miracle-cure trope, Fei didn’t actually treat it as such. Instead, her sudden hearing — which is, somewhat unfortunately, very vital to the plot — is considered to be a curse.

The plot itself is a standard fairy tale quest, with Fei being sent on a mission to save her people. It’s sauntering in pace and narrow in scope, but perfectly mimics the presentation of traditional fairy tales. There seems to be a lot of complaint in reviews regarding this, and I must admit, I don’t understand why. I felt that the book delivered everything I hoped for on this front, providing a straightforward tale full of innocent love, beautiful settings, and just enough adventure.

The only thing that kept me from giving it five stars is that it is a plot built around the idea of a miracle cure — the village literally cannot be saved without Fei’s ability to hear — and the deus ex machina at the end. It wasn’t until the climax that I realized there had actually been foreshadowing of that event all along, but it was too subtle and buried beneath other plot lines. I would have liked that set-up to be more prominent, and for Fei to have had more agency in its coming to fruition. But otherwise, I highly enjoyed this book. I would recommend it to fans of fairy tales looking for a refreshingly different and clean read.